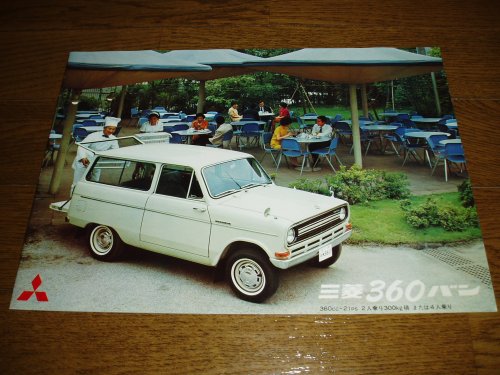 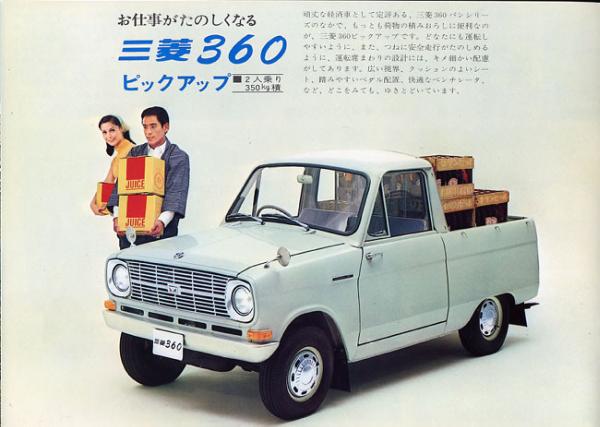 The Mitsubishi 360 Van, a 2-door wagon was introduced in April, 1961. A 2-door panel van and a pick-up were also available. The engine was a 2-cylinder 2-cycle air-cooled 359 cc placed in front driving the rear wheels. The wheelbase was 190.2 cm, the length 299 cm. The suspension a transverse leaf spring in front and a rigid axle with leaf springs at the rear. A 2-door sedan was added in October, 1962 called the Mitsubishi Minica. The pick-up remained in production for a couple of years after the introduction of the second generation Minica and was since called Mitsubishi Minica instead of 360. 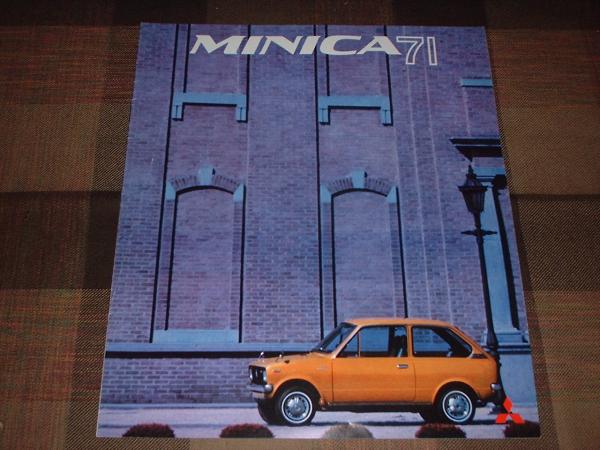 This second generation Mitsubishi Minica came in July, 1969 with a pleasant looking body as a 3-door sedan, though the rear hatch didnot reach down to the bumper. The wheelbase grew to 200 cm, there were coil springs front and rear (live axle). Next to air cooling, the engine could now also be had with water cooling (28 instead of 26 HP). There was also the Minica GSS with a twin SU carburettor and 38 HP. Depending of the model year the cars were known as Minica 70, Minica 71, Minica 72 and Minica 73 respectively. By December, 1969 a 2-door wagon was added, originally with the air-cooled, later with the water-cooled engine. This wagon would be in production until the early eighties, was renamed Minica 5 in April, 1976 receiving a 471 cc OHC engine with the length grown to 309.5 cm. By March, 1977 the engine grew to 546 cc (Minica 55). In the export the Minicas would be sold without the Mitsubishi brand name in front. 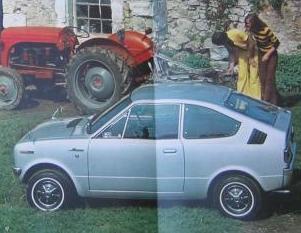 May, 1971 saw the release of the Mitsubishi Minica Skipper, a 2-door coupe (with liftable back window), with the water-cooled engine, in the meantime grown to 34 HP (the 38 HP was available in the GT). After the intro of the 3rd generation Minica in October, 1972 the Skipper received the 359 cc OHC engine and was renamed Mitsubishi Minica Skipper IV. 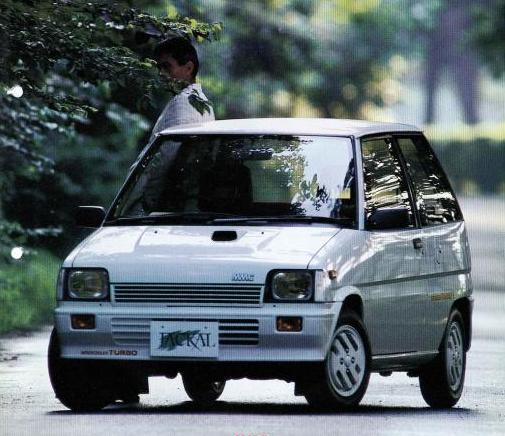 February, 1984 saw the switch to front wheel drive in the 4th generation Mitsubishi Minica, the more commercial version still called Mitsubishi Minica Econo. There were a 3-door and a 5-door sedan, the wheelbase was 226 cm, and there was a torsional beam axle with coil springs at the rear. In September, 1985 a four-wheel-drive version was added with a wheelbase of 226.5 cm and a live rear axle with coil springs. By January, 1987 the engine became a 3-cylinder 548 cc (turbo available) and a year later, permanent four-wheel-drive became available. In the export, the car was now called Mitsubishi Towny and the engine was originally a 2-cylinder 783 cc, later a 3-cylinder 796 cc; a 3-door panel van became also available. 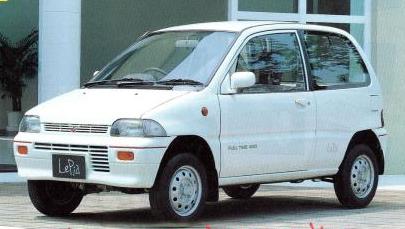 The 5th generation Mitsubishi Minica was introduced in January, 1989 with the same engine, wheelbase and suspension as the previous version. The bodies were a 3-door and a 5-door sedan, as well as one with 2 doors left, 1 right (and a back door), called Lettuce. Surprisingly, the turbo was now a DOHC 5-valve with the maximum 64 PS for the first time, in the Dangan ZZ. In time with the new regulations the engine rose to 657 cc by March, 1990 except for the turbo which changed only in August, 1990. There was now also a DOHC 5-valve without turbo. The length grew to 329.5 cm (bigger bumper).

Also in March, 1990 the Mitsubishi Minica Toppo arrived, a vehicle with a 3-door MPV body. Four-wheel-drive available, turbo not available. Together with the arrival of the 6th generation Minica in September, 1993 the wheelbase grew to 228 cm with the front end revised. The Toppo was now also available with 2 doors left. For engines see hereafter. There was also a limited edition RV with a bumper guard and a rear-mounted covered spare tire. A retro version with revised front end, called Town Bee arrived in January, 1997.

So, the 6th generation Mitsubishi Minica arrived in September, 1993. The wheelbase was now 228 cm, there were a 3-door and a 5-door sedan. Next to the 3-cylinder with the 5-valve engines deleted came a 659 cc 4-cylinder OHC 4-valve and DOHC 5-valve turbo. By January, 1997 a version with a retro front end arrived, the Town Bee. In Taiwan, this generation has been sold as Mitsubishi Towny. 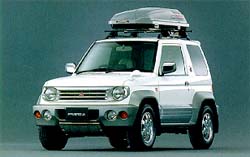 In December, 1994 a good looking four-wheel-drive offroad vehicle was released, the Mitsubishi Pajero Mini. The wheelbase was 220 cm, the longitudinally placed engine the 659 cc 4-cylinder OHC 4-valve or DOHC 5-valve turbo and there was a separate chassis. By January, 1996 the vehicle became also available with rear wheel drive only. In November, 1995 beyond the kei car limits and with the same basic body arrived the Mitsubishi Pajero Jr. with extended wheel arches, a length of 350 cm and a width of 154.5 cm. The engine was a 1094 cc OHC 4-valve. There were a couple of nice limited editions available based upon these vehicles, such as the Pajero Mini Iron Cross, Pajero Mini Desert Cruiser, Pajero Mini White Skipper, Pajero Mini Duke, Pajero Jr. Mc Twist and Pajero Jr. Lynx.

By October, 1998 the Pajero Mini was extended with 10 cm (extra length before the rear axle) and widened with 8 cm using the same door panels as before. Engines remained roughly the same. It is worth notifiying that the Pajero iO (Pajero Pinin in Europe), although with a different and wider (168 cm) body, has the same wheelbase, at least in 3-door form, as introduced in June, 1998.

The new regulations in October, 1998 were reason for the release of the 7th generation Mitsubishi Minica as a 3-door and a 5-door sedan. The wheelbase is 234 cm, the only engine the 3-cylinder 657 cc OHC, now a 4-valve, the rear suspension a torsional beam as usual, and a live rear axle for the four-wheel-drive. The Town Bee retro version arrived in January, 1999 with an odd front and rear end. In December, 1999 arrived the Mitsubishi Pistachio, 4 cm longer and with a 1094 cc DOHC 16-valve direct injection engine to be sold in a limited series of 50 only to local authorities and public corporations that are working to protect the environment.

Also in October, 1998 arrived the 5-door MPV, now called Mitsubishi Toppo BJ, technically the same as the Minica, however plus the 4-cylinder DOHC 5-valve turbo engine. In January, 1999 came the Toppo BJ Aero with a sporty front end. Also, in January, 1999 arrived the Mitsubishi Toppo BJ Wide with a width of 155.5 cm (achieved by wider wheel arches) and a length of 354 cm (bigger bumpers). The engine is a 4-cylinder OHC 1094 cc 4-valve. In October, 1999 a 659 cc 4-cylinder OHC 4-valve turbo joined the DOHC 5-valve turbo.

In October, 2001 came the Mitsubishi eK Wagon (5-door wagon) with roughly the same specifications as the Minica.