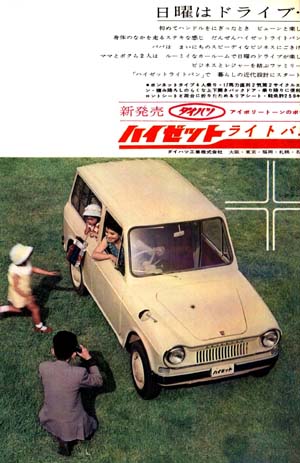 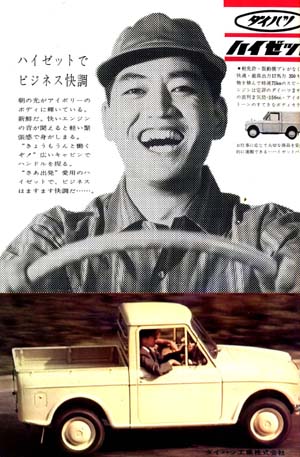 October, 1960 saw the introduction of the Daihatsu Hi-Jet pickup with a wheelbase of 194 cm and a separate chassis. Coil springs in front and a rigid axle with leaf springs at the rear, with a 2-cycle 356 cc 2-cylinder air-cooled engine in front driving the rear wheels. The surface of the cargo body was less than 1.1 square meter! By June, 1961 arrived a 2-door wagon. In September, 1962 the Daihatsu New-Line pick-up arrived with the wheelbase extended to 222 cm and the length to 334.5 cm. This vehicle had a 797 cc water-cooled OHV engine. Export names for the Hi-Jet wagon and pick-up were Daihatsu L35V and L35 respectively, the New-Line was called Daihatsu L50. 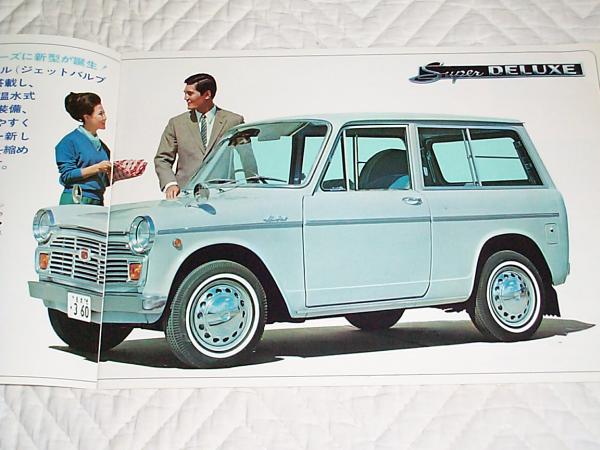 The second generation Hi-Jet arrived in October, 1963 with a pleasant looking body, with the same specifications. In November, 1966 a water-cooled engine became available additionally. The New-Line was continued with the new body. 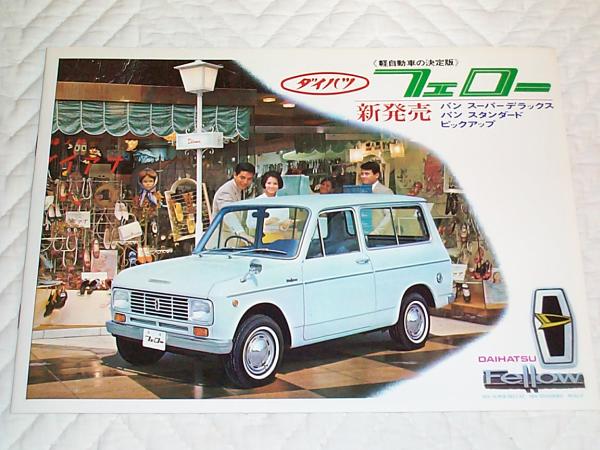 In November, 1966 came the Daihatsu Fellow 2-door sedan on a wheelbase of 199 cm, with coil springs in front and a coil-sprung swing axle at the rear, the water-cooled engine and lay-out were the same as in the Hi-Jet, the body was now integral. By June, 1967 a 2-door wagon and a pick-up arrived, riding on the same 194 cm wheelbase as the Hi-Jet, and with the same rear axle. In June, 1968 the Fellow SS was released with a 32 HP two carburettor engine. This was the first of the hot minis in the kei car industry to compete with the 31 HP Honda N360. All export models were called Daihatsu 360. 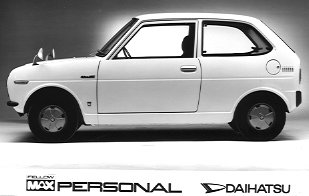 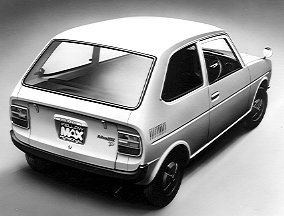 Then, in April, 1970 arrived the Daihatsu Fellow Max with front-wheel-drive, the engine now placed transversely, and with independent rear suspension with coil springs. The wheelbase grew to 209 cm. In July, 1970 a 2-door wagon was added with rigid rear axle with leaf springs, as well as the SS with a 40 HP (a record high in the industry) two carburettor engine with a compression ratio of 11:1. In August, 1971 a very pleasant looking 2-door hardtop was introduced, and in October, 1972 a 4-door sedan. At the same time, due to poor fuel economy, the 40 HP engine was down to 37 HP and the compression ratio down to 9:1. Export models were still called Daihatsu 360.
By May, 1976 due to the new tax regulations, the engine was now a 2-cylinder 547 cc, it was a new OHC design. Length of the cars was now 312 cm for the sedan, and 312.5 cm for the wagon, width 132 and 133 cm respectively, with the same basic body shell, the cars were now called Daihatsu Fellow Max 550, and the Hardtop was deleted.
Then, in July, 1977 the cars were renamed Daihatsu Max Cuore with the length now 316 cm for the sedans and 316.5 cm for the wagon. By March, 1979 the car was renamed Daihatsu Cuore (though still badged Max Cuore). In Europe, the car was called Daihatsu Cuore from 1977 on. 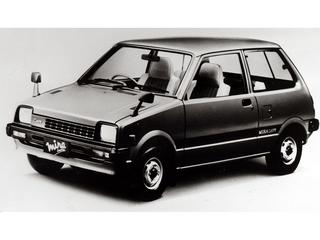 The next generation Daihatsu Cuore arrived in July, 1980, the more commercial version was called Daihatsu Mira Cuore. There was a 3-door sedan and a 4-door sedan with a lift up back window. The wheelbase was now 215 cm, length and width 319.5 and 139.5 cm following the tax regulations. Engine and suspension specifications remained the same, that is the Mira Cuore, succeeding the wagon, featured the rigid rear axle with leaf springs. This vehicle was renamed Daihatsu Mira by May, 1982. In October, 1983 arrived a Turbo, as well as a four-wheel-drive (rigid rear axle with leaf springs). In the export, the Daihatsu Cuore was also called Daihatsu Domino, by 1981 arrived a 617 cc engine next to the 547 cc engine. 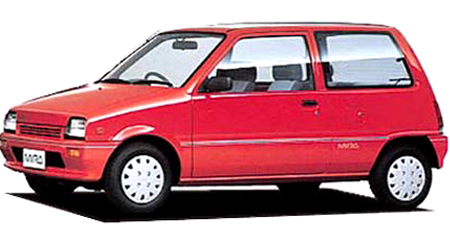 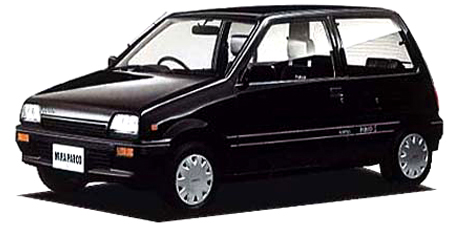 The 4th generation of the sedan came in August, 1985, again as Daihatsu Cuore and Mira, there were now 3-door and 5-door sedans, the wheelbase rose to 225 cm, and all models now had the independent rear suspension with coil springs except for the four-wheel-drive models which had a live rear axle with coil springs. The engine became a 547 cc 3-cylinder. In October, 1987 the four-wheel drive system became permanent. By October, 1988 the limit of 64 PS was reached in the Mira Avanzato TR-XX EFI Turbo. In Japan, the Cuore was deleted by April, 1989. In the export, there was a 3-cylinder 846 cc engine (Switzerland 796 cc), and the Domino name was retained for certain markets. 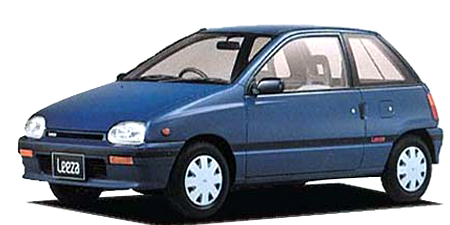 On a wheelbase of 213 cm came in December, 1986 the Daihatsu Leeza 3-door coupe, also available with turbo engine. Due to the 1990 tax regulations the length grew to 329.5 cm in August, 1990 and the wheelbase grew to 214 cm, the engine became a 659 cc OHC 4-valve with or without turbo. In November, 1991, a convertible arrived, the Leeza Spider with the turbo engine. 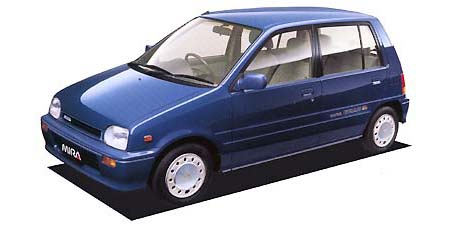 In March, 1990, in time for the new regulations arrived the 5th generation Daihatsu Mira. The wheelbase was 228 cm, the length 329.5 cm, the engine a 3-cylinder 659 cc OHC 2-valve or 4-valve, both with or without turbo; four-wheel-drive as well as four-wheel-steering (the first and only in the kei-car industry) was available.By August, 1992 the higher-on-the-wheels four-wheel-drive Mira RV-4 was released. In Malaysia, the Mira is produced since August, 1994 as Perodua Kancil 5-door sedan with a length of 339.5 cm with both 659 and 847 cc engines. Export models were still called Daihatsu Cuore or Domino, also Perodua Nippa with a 3-cylinder 847 cc engine.

As a successor to the Leeza came in January, 1992 the Daihatsu Opti with the same 228 cm wheelbase as the Mira, as a 3-door sedan. Only engine was the 3-cylinder OHC 4-valve 659 cc without turbo. Four-wheel-drive was available. A 5-door sedan arrived in August, 1993. From October, 1995 on these vehicles could be had with a 3-cylinder DOHC 4-valve engine (without turbo). In May, 1996 the Opti Classic was added with a retro front end.

The 6th generation Daihatsu Mira arrived in September, 1994 on a wheelbase of 230 cm. There were 3- and 5-door sedans, and the four-wheel-drive models still had the live rear axle with coil springs. Next to the 3-cylinder OHC engines came a 659 cc DOHC 4-valve 4-cylinder engine, with and without turbo. In October, 1995 a DOHC 4-valve 3-cylinder with and without turbo replaced the OHC 4-valve. In August, 1997 the Mira Classic was added with a retro front and rear end. In the export the cars were still called Daihatsu Cuore and had the 3-cylinder 847 cc engine. The length was 331 cm. 1990~1998 3-cylinder 659 cc engines

By August, 1995 the Giugiaro-designed Daihatsu Move arrived on the same wheelbase of 230 cm, with a 5-door MPV body, four-wheel-drive was available, engines were the 4-cylinder DOHC 4-valve turbo as well as the 3-cylinder DOHC 4-valve, with and without turbo. In May, 1997 arrived the Move Custom with a different front end. In the export the Move had the same 3-cylinder 847 cc engine and length as the Cuore. 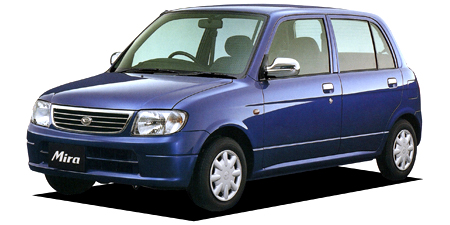 In time for the new regulations came in October, 1998 the 7th generation Daihatsu Mira, now with a wheelbase of 236 cm, a length of 339.5 cm and a width of 147.5 cm. The rear suspension is now a torsion beam, while the four-wheel-drive models still have a live rear axle. The 659 cc engine is now only with 3 cylinders as an OHC without turbo and a DOHC 4-valve with and without turbo. There are 3- and 5-door sedan models. By March, 1999 came a retro version, the Daihatsu Mira Gino. The turbo engine became limited to the Gino by October, 2000. In the export known as Daihatsu Cuore the engine is a 3-cylinder 989 cc DOHC 4-valve. 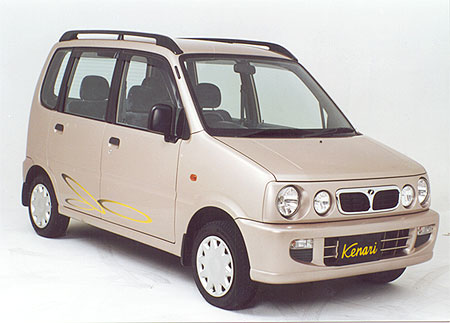 The 2nd generation Daihatsu Move (in the same style as the 1st generation, now styled by Giorgetto Giugiaro) with the same dimensions (albeit higher of course) and suspension as the Mira is also available with the 4-cylinder DOHC 4-valve turbo, next to the 3-cylinders as used in the Mira. Introduced in October, 1998 (only 3 years after the release of the first Move) the body is a 5-door MPV and four-wheel-drive is available. The Move Custom has a different front end treatment including front fenders. In the export the engine is a 3-cylinder 989 cc DOHC 4-valve (length of vehicle 341 cm). From June, 2000 on this vehicle is available in Malaysia as Perodua Kenari (length 346 cm). 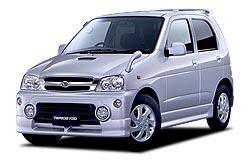 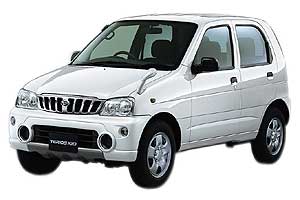 The Daihatsu Terios Kid 5-door SUV was introduced in October, 1998 with four-wheel-drive and a 3-cylinder 659 cc DOHC 4-valve turbo engine, placed longitudinally. Coil springs in front and a 5-link live axle with coil springs at the rear. This vehicle became available with "rear-wheel-drive only" in January, 2000. By January, 2002 arrived the "lower-on-the-wheels" (20 mm for the 4WD and 45 mm for the 2WD) Daihatsu Terios Lucia. This version is lacking the back spare tire. With a wheelbase of 242 cm (the longest in the kei car industry) the Terios Kid is basically the same vehicle as the Daihatsu Terios introduced already in March, 1997 ("rear-wheel-drive only" available from May, 2000) with longer rear end and extended wheel arches. Length and width of the Terios from 378.5 and 155.5 cm resp., engine 4-cyl. 1295 cc OHC 4-valve, by May, 2000 a 1297 cc DOHC 4-valve, also available with turbo.

Then in November, 1998 arrived the 2nd generation Daihatsu Opti as a (pillared) 4-door hardtop, the first in the kei car history. It rides on the same wheelbase and suspension as the Mira and is available with the same 3-cylinder engines as well as the 4-cylinder 659 cc DOHC 4-valve turbo. Four-wheel-drive is available as usual. In March, 2000 arrived the Opti Classic with retro front end. At the same time, the 4-cylinder engine was deleted.

Based on the Mira arrived in December, 1999 the Daihatsu Naked 5-door wagon with the 3-cylinder DOHC 4-valve engine, with and without turbo, four-wheel-drive available. 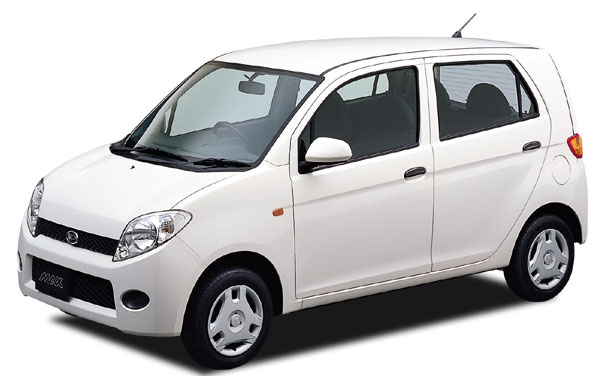 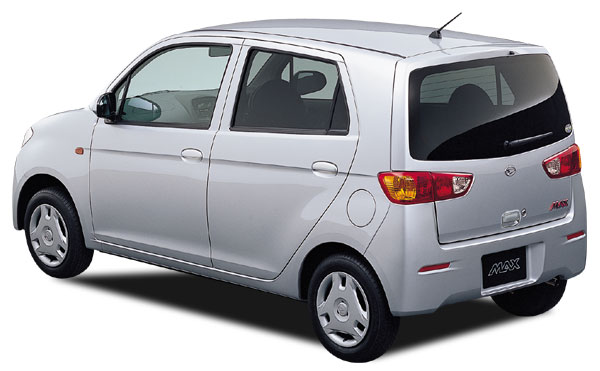 In October, 2001 the Daihatsu Max 5-door wagon arrived with the same technical data as the Move, though 10 mm lower.