The original first generation Corolla was introduced in November, 1966 as a 2-door Sedan. I would like to rate the neat styling at 8. It rode on a 228.5 cm wheelbase with coils plus transverse leaf springs at the front and a rigid axle with leaf springs at the rear, and it featured rear-wheel-drive. In May 1967, a 4-door Sedan was added as well as a 3-door Wagon. In April, 1968 a 2-door Coupe was introduced as Corolla Sprinter.

In May, 1970 the second generation Corolla appeared with a wheelbase of 233.5 cm, and without the leaf spring at the front. The styling was pleasant, again an 8. In my eyes this would be the only Corolla with distinctive styling. All body styles were retained, a 5-door Wagon was added. August 1971 saw the introduction of the Toyota Sprinter 4-door Sedan, which had different rear roof end styling and was sold in Japan through the 'Toyota Auto' dealer outlet. At the same time the Corolla Sprinter 2-door Coupe was renamed Corolla for the 'Toyota Corolla' dealer and Toyota Sprinter for the 'Toyota Auto' dealer. In March, 1972 high-performance Coupes ware added as Corolla Levin and Sprinter Trueno. In November 1974, Daihatsu would introduce the first generation Charmant 4-door Sedan and 5-door Wagon with different sheet metal; this car was mentioned Daihatsu 1200 and 1400 in the general export market, a 2-door panel van became also available.

By April, 1974 the third generation Corolla 30 Series was introduced with less then average styling, I rate it a 6. Suspension remained the same, wheelbase rose to 237 cm. New was the Corolla Hardtop based on the Sedan, initially to replace the Coupe. The old Corolla 20 Sedans and Wagons (as Vans which was the designation in Japan for the commercial types) were sold next to the new series for a couple of years. Sprinter again featured a different roof end for the Sedan, the Coupe now had a different lower body and again was available as Sprinter Trueno. This body style was sold as Toyota Trueno in certain export markets. By January, 1976 the Corolla and Sprinter Liftback were added with the Coupe body extended. A year later, the Corolla 2-door Hardtop was also sold as Sprinter, and the Sprinter Coupe as Corolla which saw the re-introduction of the Corolla Levin.

The fourth generation Corolla, with rear-wheel-drive for the last time for the sedans, appeared in April, 1979, more than the usual four years later, obviously because of the economical crisis. It has an average styling: a 7. The wheelbase was 240 cm now, and there was a live rear axle with coil springs, but not for the Wagon. This would be the last series with a 2-door Sedan, and a 3-door Wagon. Neither was there a sedan-derived Hardtop (or Coupe) anymore. The Sprinter 4-door again had a different roof end. To the different body Liftback and Coupe was now added a Hardtop; all three body styles had 6 side windows. Corolla Levin and Sprinter Trueno names were retained for the high-performance models in Japan. The second generation Daihatsu Charmant with different body shell, but based on this generation Corolla was introduced in October 1981 as a 4-door 6-window sedan only.

The fifth generation Corolla (May, 1983) saw the switch to front-wheel-drive and independent rear suspension, but not for the separate body 2- and 3-door Coupes which were built on the same floor pan as the last series, and were from now on called Corolla Levin and Sprinter Trueno for the whole range. The wheelbase for the 4-door Sedan and the new 5-door (6-window) Sedan was 243 cm. These were the only two body syles (rated at 7.5), the Wagons were not changed; in October 1984, a short back Hatchback (3- and 5-door) was added, called Corolla FX in Japan. The Sprinter, for the first time had its own sheet metal pressing, though it hardly differed from that of the Corolla. It was also built as 4- or 5-door Sedan, the 4-door with a 6-window roof as well (where the Corolla had only 4). This Sprinter was sold in USA as Chevrolet Nova.

May 1987 saw the introduction of the sixth generation Corolla and now things became quite complicated. Wheelbase remained the same at 243 cm, but the cars were 2 cm wider. There were two bodies, called here Corolla-shell (an 8) and Sprinter-shell (a 9, the most balanced shell ever) for reasons of convenience. Suspension remained the same, but the more commercial versions of the Wagons featured a rigid axle with leaf springs at the rear. This was the first year for the front-wheel-drive Wagon (5-door). The Corolla body shell existed also as a 4-door (4-window) Sedan, and a 3-door and 5-door (6-window) short backed Hatchback (still called Corolla FX in Japan). The Sprinter body existed as a 6-window 4- and 5-door Sedan (called Sprinter Cielo in Japan) as well as a 5-door Wagon, called Toyota Sprinter Carib (intro February, 1988) in Japan with 4-wheel drive and a coil-sprung live rear axle. This Sprinter Carib succeeded to the earlier Tercel-based Sprinter Carib. The 4-wheel-drive lay-out was already introduced on the 4-door Sedan in October, 1987. The Toyota Corolla Levin and Sprinter Trueno now were front-wheel-drive also, the 3-door was deleted; the car was called Corolla in the export. The Corolla-shell Wagon appeared also as Toyota Sprinter by August, 1988. The Sprinter-shell was sold in USA as Geo Prizm (not the Wagon). The Sprinter-shell Wagon, always with 4-wheel-drive was named Corolla in the export markets. The Sprinter-shell 5-door Sedan was part of the Corolla line in the export.

Then, in June 1991, the seventh generation was introduced with a rounded body shell, I rate it a 6. Wheelbase rose to 246.5 cm. These cars appeared in Europe and USA about a year later. Again Corolla and Sprinter had different bodies, Corolla started as a 4-door Sedan only, the 5-door Wagon was added in September, 1991, and 3-door and 6-window 5-door short backed Hatchbacks in May, 1992 (again called Corolla FX in Japan). The Sprinter-shell existed as a 4-door Sedan and a 5-door Sedan, the latter not available in Japan; Geo Prizm in USA only as 4-door Sedan; 5-door Sedan part of the Corolla line in Europe. The Corolla Levin and Sprinter Trueno had their own new body as a 2-door Coupe and were for Japan only. Suspension lay-out was the same as for the sixth generation, except that there was now also a 4wd Wagon (Van) with a rigid rear axle and leaf springs. There was no Sprinter-shell Wagon, the Sprinter Carib carried over from the previous generation. The Corolla-shell Sprinter Wagon was repeated. May 1992, saw the introduction of a separate body shell as a 4-door pillared Hardtop, the Corolla Ceres and Sprinter Marino, for Japan only. 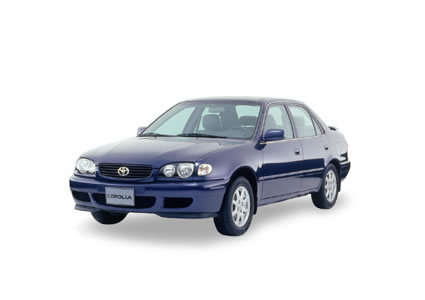 The eighth generation Corolla was introduced in Japan in May, 1995, an 8. For the first time, the floorpan remained the same. The car was introduced in Europe in the summer of 1997. Sprinter no longer has its own body shell. In Japan the 4-door 4-window is the Corolla, the 4-door 6-window the Sprinter and the Sprinter Carib, now also available with front-wheel-drive (next to 4-wheel-drive) is the Wagon. In Japan, the Corolla and Sprinter Wagon have seventh generation shells. Whether front-wheel-drive or 4-wheel-drive, all eighth generation models have independent rear suspension. The Corolla Levin and Sprinter Trueno again have their own bodies as a 2-door Coupe. In January, 1997 the Corolla Spacio with different 2-box 5-door body was introduced in Japan. In Europe and other markets, a 3-door short backed and 5-door 6-window normal Sedan are available, while the Wagon is also eighth generation, having the body of the Sprinter Carib. In Europe, the Corolla line has its own front and rear treatment. In USA, for the first time, the Corolla (4-door Sedan) has its own body for the 1998 model year, with the Chevrolet Prizm having different front and rear fenders.
This and the previous generation Corolla can be regarded as world car of the nineties with production in Japan, USA, Britain (8th), Turkey, Thailand, South Africa, Australia (7th) and Brazil (8th). In 1998 and 1999 the Corolla was built in 6 continents.

The ninth generation Corolla came in August, 2000 now with the wheelbase grown with a record 13.5 cm to 260 cm (a shortened Vista platform); the length rose with 8 cm. At the front-wheel-drive versions the independent rear suspension was replaced by a torsion beam axle. The styling is rather compact, I would rate it a 7. There are the 4-door Sedan and a 5-door Wagon, called Corolla Fielder. The seventh generation based utilitarian Corolla and Sprinter Wagon as well as the Sprinter Carib remained available until 2002. By January, 2001 arrived a 5-door Hatchback model, called Corolla Runx; it is also sold as Toyota Allex as a successor to the Sprinter. In May, 2001 came the new Corolla Spacio, called Corolla Verso in Europe. Autumn 2001 came in Europe a 3-door Hatchback. Different from what was the case with the previous generation, the American 4-door Sedan, introduced early 2002 now had basically the same body as the Japanese model as usual. The Americans developed their own tall wagon, called Toyota Matrix, released in January 2002, also with all-wheel-drive, and renamed Corolla Matrix by 2005 model year. With a different body began in late 2001 production of the Pontiac Vibe (sales by February 2002), sold in Japan as Toyota Voltz from August 2002 until 2004. By March 2004 a re-designed Corolla Verso arrived in Europe.